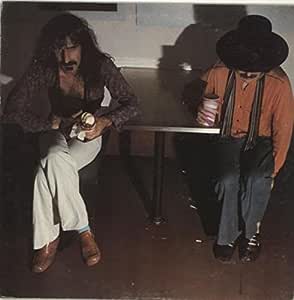 FRANK ZAPPA / CAPTAIN BEEFHEART / MOTHERS Bongo Fury (1975 US 9-track LP never issued on vinyl in the UK featuring the vocal talents of Don Van Vliet as well as the classic Jazz Zappa band of the mid 70s nicely augmented by a very young Terry Bozzio on the live material picture sleeve. This copy remains in wonderful condition with few signs of its thirty five years - Still in the original opened shrink DS2234)

Andrew Thomas
5,0 de 5 estrellas Best FZ Album ever?
Revisado en Reino Unido el 12 de julio de 2007
Compra verificada
It's a close run thing between Uncle Meat and Bongo Fury. What might swing it in favour of BF is that it might just be the best place to start for someone who - God forbid - had never heard any FZ before.

Buy this album. If you don't love it, I'll move in next door to you and your lawn will die.

Ratzo Rizo
1,0 de 5 estrellas 2012 Remaster TERRY BOZZIO'S DRUMS HAS SUFFERED AGAIN
Revisado en Reino Unido el 16 de febrero de 2016
Compra verificada
ANOTHER VERY DISAPPOINTED 2012 REMASTER, I bought this album on 180g RECYCLED VINYL back in 1975 on ZAPPA'S descreet Records it came in to the UK as an import as CAPTAIN BEEFHEART had contract problems back then & its still SUPERIOR then this & so is the RYKO release.
When I bought this FANTASTIC album (A MILLION STARS) I was completely floored by this music, terry's drumming is SUBLIME, and so is FRANKS BLISTERING GUITAR PARTS so once again I can not understand how this remaster is so bad how can TERRY'S DRUMMING BE SIDELINED like this so if you can find the RYKO VERSION or vinyl I would go there because this is so not right, but you pay your money and take your chance
Leer más
A 4 personas les ha parecido esto útil
Útil
Enviando comentario...
Gracias por su comentario.
Lo sentimos, no hemos podido registrar tu voto. Vuelva a intentarlo
Informar de un abuso
Traducir reseña a Español

Stephen Maestas
5,0 de 5 estrellas What must have been in the water down in Cali?
Revisado en los Estados Unidos el 19 de agosto de 2013
Compra verificada
These two high school mates are both on the eccentric side of the tracks. They are both accomplished songwriters and musicians of high regard. This is one of the most bizarre, albeit, rocking albums in the Frank Zappa Catalog! The poetry of Captain is different from that of Zappa, and you can kinda judge which artist wrote each song without reading the liner notes. The three songs that are my favorites are: Carolina Hardcore Ecstasy, Advance Romance and Muffin Man. The band is one of the best he ever assembled and it'll make you laugh and it delivers some really hot guitar jams! Just what you would expect from these two!
Leer más
A 5 personas les ha parecido esto útil
Útil
Enviando comentario...
Gracias por su comentario.
Lo sentimos, no hemos podido registrar tu voto. Vuelva a intentarlo
Informar de un abuso
Traducir reseña a Español

Jens Jensen
3,0 de 5 estrellas Maybe the best of both . . .
Revisado en los Estados Unidos el 10 de noviembre de 2005
Compra verificada
I bought this recording back when "Bongo Fury" was first released. I eventually wore out the vinyl. Then I bought a cassette version, which I also wore out by the mid-'90s. The CD should last longer. Zappa and Beefheart seem to bring out the best in each other. The performance captured here is better than anything I've heard from Zappa (except for maybe " Freak Out! " and " Shut Up 'n Play Yer Guitar "). And it's up there with the best of Beefheart's records, though I admit to being a big fan of the Captain's later work such as " Shiny Beast (Bat Chain Puller) " and " Ice Cream for Crow ." Although this live performance was a sort of "celebration" of America's bicentennial, it still holds up...things really haven't changed all that much. This is great in-your-face stuff. There are no losers on this CD, with "Sam With The Showing Scalp Flat Top" and "Poofter's Froth Wyoming Plans Ahead" being my favorites. Get it and see what all the excitement is about!

HOWEVER: The sound quality of this CD is one of the poorest I've ever heard. It clearly wasn't remastered but sounds like it was copied from an old cassette copy. Even my own CD copied from my old cassette sounds better! This CD version has no bottom end and has so much high end that the cymbals seem to hiss in the speakers. If this album ever gets a decent remaster treatment, I'll buy it again.
Leer más
A 31 personas les ha parecido esto útil
Útil
Enviando comentario...
Gracias por su comentario.
Lo sentimos, no hemos podido registrar tu voto. Vuelva a intentarlo
Informar de un abuso
Traducir reseña a Español