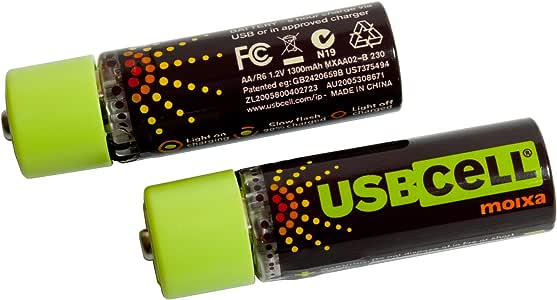 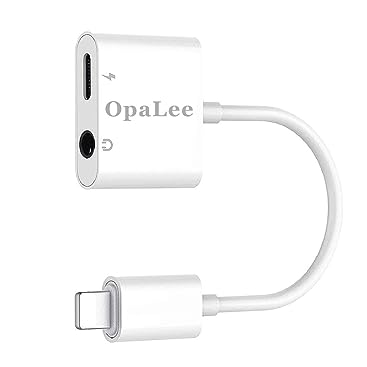 Robert Poulsen
3,0 de 5 estrellas Yet to be Perfected
Revisado en Reino Unido el 1 de julio de 2016
Compra verificada
USB AA Batteries
I bought these on the 30th of March, 2014 when they were £6.99 for just 2x but have since gone up by a pound on Amazon and in some cases go for more ( £10.75 ) I have since bought another set due to their versatile nature of being compatible with all AA powered gadgets and gizmos. So what's the deal? Well they're just AA batteries that charge via USB port - they have a flip-top which reveals this. Once plugged in, a green LED light (a ring around the top) lights up, this slowly flashes when at 90% charged and stops entirely when fully charged. They're supposed to take 5 hours to do so which is a bit much but considering these were the very first USB rechargeable batteries I could find, some drawbacks were expected. Like most, they must not be disposed of in fires and should not be inserted at the wrong polarity. (+/-) They're only available in pairs and I could only find them on Amazon and originally in 'Argos but have since spread elsewhere online like eBay as have other manufacturers outside of Moxia like Wduk. Currently, they are only available in AA sizes but perhaps in the future their range will extend to AAA and those square ones or perhaps even the diddly ones inside watches and laser pens.

The Bad
Within minutes of being connected to my laptop, the connector part has gotten considerably warm. Give it half an hour and the whole unit gets seriously hot - to a point where it's quite worrying. I don't believe they could scold or set fire or anything but overheating in this way is generally a bad sign among technical appliances (with obvious exceptions). What gets on my nerves the most though is that you can't tell when they are charged. Sure, it claims to tell you with a little diagram on the side but this is pretty fictitious - because despite claiming the LED turns off completely when fully charged, you can simply remove them from the port, reinsert them and the light comes back on - so you're ironically, in the dark. This lack of clarity is annoying to the point where I wish I either had a dedicated rechargeable battery charger (which shows you the percentage) or perhaps better USB connectivity so that you can read them on the computer/laptop. Lastly, the materials used are kinda crappy too as the battery has a slippery sticker on it, the lid is bog standard plastic and the way it is connected is via an elasticated rope - yep, this thing is held together by a hairband.

The Good
They work though! You connect them by USB, leave them for long enough, clip the tops back on and put them into whatever AA powered device. There are no restrictions either - so you can use them in literally any AA slot. Being rechargeable, you no longer have to go out and keep buying packs of batteries, rummage the battery draw or switch over used batteries in the hope that they have some juice left in them. So you're not only saving money (a lot of money) and time but to a lesser extent, the planet! (because you aint throwin' away stuff no mo) The flip-top not only acts as a crucial part to connect the positive (+) part of the battery but also as decent protection for the USB connector. The design of dark brown and light green is a strange one but at least it helps them stand out from the crowd - as does the little spherical power/sun design which is nice. It was always an idea that had floated around in my mind (as well as many others obviously) that these should hit the market and hopefully in the near future, will have faster charges, better longevity and less compromising features. A 3 star rating may seem harsh to such a possible revolutionary product, but that's just it, they are satisfactory in most senses because they pretty much do as stated - but I'd still recommend them for leisurely use. So nothing essential/professional.
Leer más
Informar de un abuso
Traducir reseña a Español

Not so fussed about battery life as one lives in laptop bag and other in the mouse. The 8 odd hour USB Port charging doesn't bother me either as I work an 8 hour day so usually after a day (or one plus a second day/period) of charging I can drop the recently charged battery in my laptop bag and wait for the in-use one to run out!
If I'm feeling impatient I can charge via pretty much and mobile phone/Kindle charger with a USB port so that's convenient enough.

So yes - They get hot when charging but I guess that's up to the end-user to be sensible about where they put it.... Also no issues with compatibility/size.

I would suggest that battery life wouldn't be great for high-draw applications like Cameras, Control Pads, etc, but for a Wireless Mouse and having another handy it seems to give me a month or two.... Not really checked, just pleased that it's more convenient that buying new disposable batteries all the time!
Leer más
A una persona le ha parecido esto útil
Informar de un abuso
Traducir reseña a Español

Fevermonkey
5,0 de 5 estrellas Definitely one of my more useful purchases
Revisado en Reino Unido el 15 de mayo de 2016
Compra verificada
I'm very surprised more people don't know about these. I bought my first pair a few years ago, and have always found them to be perfect for my relatively power-hungry wireless mouse. When I think about the amount of money I would otherwise have spent buying AA batteries, they have probably paid for themselves several times over. I like them so much in fact that I bought another set the other day.

They hold their charge surprisingly well. I have found that a single charge (which takes about 4-5 hours through my laptop's USB port) lasts around the same as an 'average' AA battery (about 5-6 weeks in the case of my mouse). They are also very durable - over the course of the five years or so I've had them, the amount of charge they hold doesn't seem to have diminished at all.

I've told quite a few people about these and they've all been impressed by the idea, so it's a wonder these aren't better known about as it's a great concept. Although they're not as powerful as the very top-end batteries, they're certainly better than the lower-end of the market and are really good for things like remotes, clocks and mouses (or mice?). They're also a lot more healthy for the environment.

Can't really fault them at all, they are great for convenience as well as eventual money-saving.
Leer más
Informar de un abuso
Traducir reseña a Español

Save over £3.50 and get them directly from the manufacturers website: : [...]
Leer más
Informar de un abuso
Traducir reseña a Español