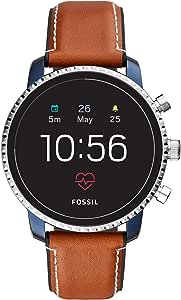 Artículos a menor precio a considerar

Victor Meldrew Mk2
1,0 de 5 estrellas Attractive watch but poor performance+++Updated and rating reduced from 3 to 1 star+++
Revisado en Reino Unido el 11 de diciembre de 2018
Opinión de cliente de Vine de producto gratis( ¿Qué es esto? )
This really is an attractive watch and my 18 year old summed it up perfectly for him - "Wow, looks neat". On a young person's wrist it delivers a message about style and functionality. Great design, attractive and oozes quality at a reasonable price - bright and clear face, which displays automatically when you tilt your wrist. Great then? Yes, except a full charge only lasts 24 hours (if you are lucky) and in terms of performance, it is nowhere near as fast as others I have seen and at £249.00 as at 11th December 2018, I expect more. It just isn't as good as the Samsung Galaxy, or dare I say some of the Garmin watches, which offer GPs and fitness and a charge lasts much longer.

Opening the box you are given the watch, a charging cable and a set of instructions. First concern and a big one is that the instructions insist that you use of the supplied charger and that you should not use a charging hub - guess what? The Fossil does not have a charger supplied with it. Loss of a full star for that and the fact that the charge doesn't last long enough results in the loss of another.

I followed the instructions and installed the app which ensured that my Android handset and the watch paired smoothly without any problems at all. Ok, the charge lasts less time than the clockwork mechanism than the watch left me by my grandfather; it is the function of this type of watch which matters, not just telling the time, right? Well yes, it is waterproof and has a scratch resistant screen, however, I wouldn't expose the attached strap to water if you want to keep its appearance nice and a metal strap would have been a better option if you intend to get it wet on a regular basis.

The right hand side of the watch has three buttons two of which the top and bottom you can tailor to open whatever apps you want. The crown button in the middle you use to scroll through the functions available. So what can you do with it? Well quite a lot:

+. It has a heart rate monitor, which whilst accurate, isn't as good as on my Nokia watch it just takes longer to respond, it has an inbuilt GPS to track runs (the GPS runs independently from your phone); again it is good, but not as good as the Garmin watch my colleague uses. I am not sure how well once again the leather strap with take to repeated exposure to sweat and again, would have preferred a steel strap.
+. There is an NFC function which allows you to use for items such as Google pay and in fact I use with a gadget I carry with my golf clubs to detect the range from a pin on the green.
+. the Wear OS app allows you to change the watch face and has numerous options to customise the appearance of your watch and you can track the rate of charge too
+. The watch has google fit and their workout app pre-installed - personally I don't use them as in the gym I have my own workouts already, but they are pretty good if you want them. I have however used them to track me when walking and i can confirm that the pedometer etc are pretty much accurate when compared to simi!ar devices. You really need to view the app to see all the functions.
+. There are a range of functions on the watch including:

Making calls when tethered to your phone
Receive notifications of emails, social media,
Control your music and can play music too
Read emails, texts and check calls received.
Can be used for Google pay (I don't use that function yet)
Heart rate monitor, with pedometer,
Automatic time zones
Custom tracking e.g repetitive functions such as drinking water etc
Accurate and responsive touchscreen
Direct connection to wi-fi
Gesture control - great once you remember it all!
Magnification function and a whole host of things which you will never or rarely us

To access the majority of the functions, press the centre button and scroll around the options.

To address the issue of battery life, I can confirm that the watch charges but nowhere near as quick as 80% in an hour as suggested by the manufacturer, more like 2 hours for a full charge - perhaps if I had the right charger! Combine that with the issue of poor power consumption and with all of the power options switched on, I cannot get the watch to last me 24 hours, however hard I try.

So only three stars for this watch? It promises so so much, the functions and available apps are great (but you may find you have them all on your phone anyway and this watch simply duplicates them) but the real killer for me is the fact that even the Fossil website states that you must use the Fossil charger and one isn't supplied and when you take a risk and charge it with a generic charger, the charge lasts less than a day. I want a watch like my Nokia, with some of these functions (GPS being the most obvious omission, but I can use my phone for that, plus my Nokia has a sleep monitor, which this watch doesn't). 24 hours might be great for some, but not for me. Update+++ having charged my watch overnight and having all of the power savimg options switched on, after a 60 minute tracked dog walk This morning, by 12:00 p.m the watch had run out of charge completely,despite having switched the tracker off at the end of the walk. Charge complete by 2:00 p.m, battery saver engaged, yet at 5:05 p.m, having received no emails etc, Wi-Fi off - the watch is at 78% of a full charge - basically, i am using the watch function only and th i mls is simply not good enough

I agree the battery life isn't amazing but if you're realistic with what you use it for you will easily last 24 hours, I charge my phone daily so don't personally see this as a big deal to do with my watch. I use the always on display, nfc, Bluetooth, Google Fit, constant heart rate monitoring and reading/replying to notifications and have never ended a day with a dead watch

The watch does come with a magnetic usb charger but no wall plug so bare that in mind, the charging times are accurate with mine

Steve W.
4,0 de 5 estrellas Nice watch but battery life not great
Revisado en Reino Unido el 26 de junio de 2019
Compra verificada
Other reviews about the battery life are pretty on the mark. I can generally get a day out of it provided I don’t do too much with it in terms of using apps. I use the default watch face that comes with it as it seems too be the one that affects the battery life the least, and has the most complications available. I have GPS on, NFC for Google Pay, Heart Rate monitor, plus I use the media controls and also the timer for cooking. Watch house on my wrist early in the morning and is usually in need of a charge when I go to sleep at night. Charges pretty quickly, usually about an hour. Had some instances of rapid discharge when I first had it but I think it just needed a few good charges under its belt to be honest. This is a nice watch for the money, but if you’re looking for more than a day’s battery life or heavy use then I would look elsewhere.

My last watch was an LG Urbane W150. Battery life was great at first but after a while about the same as this, so either way this is an upgrade. Hope this lasts longer than the LG though as the LG got through so many replacement batteries and chargers that I gave up in the end.
Leer más
A una persona le ha parecido esto útil
Útil
Enviando comentario...
Gracias por su comentario.
Lo sentimos, no hemos podido registrar tu voto. Vuelva a intentarlo
Informar de un abuso
Traducir reseña a Español

Peter Nemcok
3,0 de 5 estrellas Fossil Q Explorist HR - great smartwatch
Revisado en Reino Unido el 21 de febrero de 2019
Compra verificada
I bought these cause of the great decent business look. I own Gear Sport, Ticwatch E and Fossil has done really great job here. Combined with polished wear os 2 everything runs great and flowless. Installed already various face watch and both elegant and sporty looks awesome. I can just recommend the watch especially someone who is looking for all day round watch food business, casual and fitness. Just change the strap and you will have another watch. Bye bye my extra expensive watches.
Leer más

David
2,0 de 5 estrellas Nice but useless due to poor battery
Revisado en Reino Unido el 28 de octubre de 2019
Compra verificada
Nice watch, love the design, however it is quite useless as it cannot last a day, I leave home at 7am and by the time I get home at 6-7pm it is dead....I use it to check notifications and reply sometimes...such a same but I am returning it.
Other annoying thing is wear os, I wanted to love it but apps crash a lot, google maps is useless, uver cannot find me etc.
Leer más
A 2 personas les ha parecido esto útil
Útil
Enviando comentario...
Gracias por su comentario.
Lo sentimos, no hemos podido registrar tu voto. Vuelva a intentarlo
Informar de un abuso
Traducir reseña a Español

Chris L.
4,0 de 5 estrellas How all smartwatches should look, that don't make you look like a nerd
Revisado en Reino Unido el 12 de febrero de 2019
Compra verificada
A great smartwatch, the way smartwatches should look... I can squeeze up to three days out of it. I love it so much that I got two of them. The new Pie update fully blocks Google Pay in ireland which is annoying but that's Google's fault, not Fossil's.
Leer más

Battery life is a huge letdown for this though. You'll only get a day, maybe a day and a half - depending on usage.