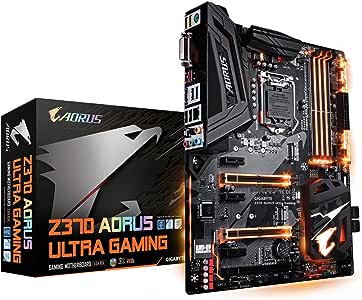 The board is well built, very strong and heavy. It looks very expensive in the flesh.

It has the debugging readout, overclock button, clear cmos button and reset at hand which saves a great amount of time.
Nice heat sinks on the vrms. I tightened the vrm screws before installing to be on the safe side. Temps under 50c most of the time on stock while gaming. No more than 65c when overclocking at 4.8 and 4.9 Ghz so very cool. My Noctua D15s fan blows straight at the vrm heat sink which is why I prefer air coolers.

RGB lighting is in full force here with lights everywhere. Full customization of lighting zones are great but the software is rubbish.
It's a better idea setting your color in the bios and not installing the Gigabyte app center which is awful imo.

Onboard audio is very good with both realltek and sound blaster built in. There's plenty of bass available which is surprising.
It has a headphone amp for the front jack only with three levels available. If you want 7.1 headphone audio then you have to plug your headphone into the rear speaker port and then enable 'switch output speaker to headphone' on the Sound Blaster 720 application. You then get more options for headphone output but you can no longer use the amp in the realtek application.

Not a problem for lower impedance headphones but may not be suitable for high Ohms headphones. I have a AE-5 sound card with more or less the same software but has dual amps so the onboard will go unused in my case but if you don't have a sound card already, you may not need one.

It has Killer Nic ethernet which I didn't bother with. Intel nic will do just fine.

I did run into a problem when I populated the board with a gpu, sound card and four sata connections. When I put the sound card in, one of my drives disappeared. I had to swap sata ports and leave port 0 and 1 empty. I think it has something to do with the pcie lanes and coffee lake cpu's not having that many. I could be wrong.

The other thing was when I had everything up and running, I had minimum processor on 5 percent on high performance power plan which would down clock when I was overclocking. When I updated the bios it wouldn't down clock and my 8700k would boost to 4.7 Ghz while idling and lower when on load. I tried everything to fix it until I reverted back to the original bios which was F3. The latest bios was F5e and was problematic so avoid it.

Other than that I think that this is an awesome motherboard. If anyone needs help, leave a comment.

All the best.
Leer más

I am never really happy with boards that cover up heat-sinks with stickers, but lets face it, most of the manufacturers do that these days. *sighs*

I was disappointed with the block that "simplifies" the insertion of the case connections to the motherboard ( hdd led, power switch and so on ) in it sounded such a great idea but it was honestly more difficult to use that than to fiddle around using the old method - without the header.

The SSD/NVMe heatsink is completely useless. It didn't even contact with the chips on the SSD/NVMe. There was a good 2mm or so gap. Not the worst thing in the world, though, I just had to add my own heatsink. I used the Gelid Solutions SubZero. Just a shame that Gigabyte couldn't come up with something similar.

NVMe’s can run a little warm. The location of all the M.2 sockets is poor. All of them are too close to the graphics card. One is directly under the graphics card, which is the worst place it can be. The one by the CPU is directly above the graphics backplate. Even the lowest is not very far from the graphics card. I found in experiments this did make an impact on the NVMe temperature. The best location for the NVMe is in the lowest M.2 socket. It made no difference when the system was idle, but when the graphics card gets going it makes a very significant difference. Even when the graphics card was just 50 degrees, in the M.2 socket above the graphics card the NVMe went up ten degrees even when it was doing nothing. Obviously the heat was just coming off the graphics card. In the lowest M.2 slot, the temperature actually fell under system load. The air circulation around the lowest socket just seems to be a lot better than the top socket even though there was a card directly above it so when the system got hot the front fans picked up and made a huge difference to the lowest M.2. Using a PCIE adapter also seemed to reduce the overall temperature of the NVMe. By about five degrees. Again, it was in a better location to get cool air from the front case fans.
So all in all if you want the coolest NVMe use an adapter. But if you don't want to use one of those then use the lowest M.2 socket. If you need to use two, then an adapter AND the lowest socket. Either way, never use the middle socket and only use the top socket if you have to.
Overall it's a great board. It has everything you could need, including two network connections, which is rather handy. Mainly the board is of course for overclocking, otherwise why would you want all the extra features(?), but I have to say that I bought it because the Ultra Gaming 1.0 has VRM issues. When I wrote this the 2.0 was not available, which has better VRM circuitry.
During installation the most important thing you need to know is to remove the plastic audio cover. It's not shielded so is just cosmetic. It's held in place by two small black screws under the board so once the board is in place you can't easily remove it. And you should remove it because it gets in the way of some pcie cards, especially graphics cards. Amazingly, especially the Aorus 1080ti!!
This board has some nice touches like a power switch so you can power up the board even if your case power switch is not working. Some diagnostic displays and so on. Honestly though you are unlikely to use most of the nice touches unless you are overclocking.
The supplied software is comprehensive albeit I didn't load most of it in. I just wanted the Windows BIOS update and RGB Fusion, which allows you to change the leds. At the moment you should update the BIOS when you get a board, because there are changes going in as we speak because the boards are fairly new. I actually wasn't very impressed with Fusion. It's simple to use and effective but it seemed to get a little confused with the graphics card ( which is also Gigabyte ). It controlled all things Gigabyte but didn't seem to quite get the graphics card right. How can I describe it? It seemed to change the colour of the graphics LED's but didn't change their mode ( pulse, wave, etc ) . Not that it matters, someplace there is utility specifically to program up the graphics card. I haven't looked in to that yet, but when I do I will update this review.
The fan control really is excellent but since I have a Corsair water cooler, I use LINK instead. Almost a shame really. For air cooling I would definitely use the Gigabyte fan control.
So, all in all, a great board. You would expect that at this price though.
Leer más
A 14 personas les ha parecido esto útil
Informar de un abuso
Traducir reseña a Español

Rick York
4,0 de 5 estrellas Warm VRM. Just get on with it. Top rgb from Gigabyte
Revisado en Reino Unido el 2 de diciembre de 2017
Nombre de estilo: Z370 AORUS Ultra GamingCompra verificada
Apart from warm vrm temps this board does exactly what it says. It'll game happily @5ghz and do NOT be put off by tech reviews who harp on about super high vrm temps. Who just runs ultra benchmarking apps and does nothing else except monitor temperatures in real life. We except vrm's get hot but as with everything you have plenty of other boards to choose from. There are several types of ways to reduce the vrm temps if they bother you, quick YouTube search on the matter will sort you out.
Leer más
A 16 personas les ha parecido esto útil
Informar de un abuso
Traducir reseña a Español

In all honesty, I couldn't be bothered to have the motherboard returned and replaced (I use the PC all the time for work). As I suspect the issue will only happen again.
I have purchased a gigabit network card which works a treat.

Overall the motherboard is great, honestly a great board.
However I cannot overlook what must be a factory fault with the boards network port. Which is why I have given the board a single star.
Leer más
A 10 personas les ha parecido esto útil
Informar de un abuso
Traducir reseña a Español

Matthew
5,0 de 5 estrellas Overall a great motherboard for the 8th gen I7's
Revisado en Reino Unido el 7 de noviembre de 2017
Compra verificada
This board is stunning to say the least, it has helped with making a beastly overclock on my i7 8700k to 5GHZ and is quite mesmerizing with the fusion RGB.

My only gripe with the product is the software is outdated on the disc and isnt very clear on wear to download the drivers and utilities.