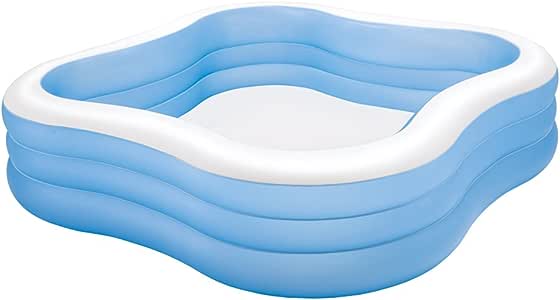 J. O'Callaghan
5,0 de 5 estrellas Fab family size!
Revisado en Reino Unido el 3 de enero de 2020
Compra verificada
This is the second of these pools we have had, and they don’t disappoint. Large and deep enough for our little one to swim around in, and can fit the 3 of us nicely (2 adults, 1 child). The kids absolutely love it!
Leer más
A una persona le ha parecido esto útil
Informar de un abuso
Traducir reseña a Español

M.M.
1,0 de 5 estrellas Plug tag fused into pool seam!
Revisado en Reino Unido el 28 de mayo de 2020
Compra verificada
It’s a shame that this pool was faulty, the pull/tag on the plug was fused into the seam of the pool and therefore had to be cut to allow it to open, now we have no tag to pull on when we want to release the plug. The pool was too big to bother trying to get it all back in the box to send back, also we needed it for the weekend.
Leer más
Informar de un abuso
Traducir reseña a Español

Wesarl
4,0 de 5 estrellas Great quality-poor concept. There may be a better option...
Revisado en Canadá el 11 de agosto de 2017
Compra verificada
Update: pool is all set up for its second summer and it's still great! I had to do 2 patches in the fall because I hit it with the line trimmer. The patches took well and it's all holding up well.

I’ve never felt so compelled to write such a lengthy review.
The product 5 stars – this thing is exactly what we wanted; big, durable, lasts long, affordable etc. My son has a blast – he runs full tilt across the lawn before slamming into the edge to catapult himself into the pool after yelling “Cannon Ball!” he even rides the edge like a horse and stands on the edge to jump in too. It’s shallow enough that we don’t have to worry (he’s 3 and yes, we fully supervise). We’ve had it for most of the summer, used at least 4 days a week. It’s big enough that the 3 of us have been in it at the same time with room to spare. It’s also survived all of this in addition to being emptied, deflated, and dragged across the lawn for a good scrubbing. ….now the scrubbing is where the issue lies.

This thing gets dirty fast. It’s at the right height that the kids are in and out, and in and out, rolling in the grass and back in… you get the picture-wait did I mention we have a sand box too? Beyond the grass the bugs, pollen, and day to day stuff, we’re now in the heat of the summer seeing mosquito larvae in the pool, which are too small to be skimmed out. I don’t think any of the above is beyond regular use, the problem is that this thing is massive and holds so much water, it’s not as simple as a drain and refill type pool. In fact pulling the plug on this pool doesn’t even do much because the weight of the water keeps the hole pressed to the ground, so the water will only drain as fast as it would through the ground until you can wedge something under it to allow for the water to drain away.

Since getting this super-awesome pool, I’ve bought a $20 pool skimmer for the grass, and have also spent $180 on a Catfish Water Blaster, which is essentially an underwater hand vac. Now that we have the mosquito issue though, it makes the water smell bad, so we put bleach in it once in a while, but that makes the water cloudy and eventually green. All this going on you probably think that I try to go all summer without draining it, but I’ve only had it for about 2 months.

To sum it up – great product, maybe not the best concept. For about twice the price ($80) I could have bought one of the blue bubble pools from the same brand that comes with a water filtration and vac system. In Hindsight that is the way that I should have gone. Now my son is in love with this pool and it’s been a real pain to keep it clean.

Love the Intex brand – this thing has really held up well, we should have just selected one of their other products.

NOTE: DON'T WASTE WATER. AFTER HAVING FUN. INSTEAD OF THROWING IT, USE THE SAME FOR PLANTS & LAWN GRASS.

SWIM CENTER IS NOT SUITABLE FOR SMALL HOUSES OR FLATS IN METROPOLITAN CITIES. GO FOR 8FEET ×6 FEET INTEX MODEL OR EVEN SMALLER.

ALWAYS STAY WITH CHILDREN WHILE THEY ARE IN POOL, AS IT COULD BE VERY DANGEROUS TO LEAVE THEM ALONE.
Leer más
A 9 personas les ha parecido esto útil
Informar de un abuso
Traducir reseña a Español