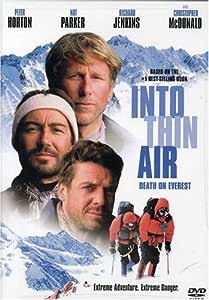 Rudy yap
1,0 de 5 estrellas Into thin air
Revisado en Reino Unido el 20 de agosto de 2012
Compra verificada
I was not able to watch the film cause the DVD is not compatible to my player. I really want to watch but the product made isn't suitable and why can't you make it suitable for everybody to watch the film.
Leer más
A 3 personas les ha parecido esto útil
Útil
Enviando comentario...
Gracias por su comentario.
Lo sentimos, no hemos podido registrar tu voto. Vuelva a intentarlo
Informar de un abuso
Traducir reseña a Español

Robert Blank
5,0 de 5 estrellas Wonderful movie about a horrible tragedy.
Revisado en los Estados Unidos el 12 de noviembre de 2016
Compra verificada
This is a great movie based off of Jon Krakauer's book by the same name. The book is so much better but if I was to compare this movie to Everest which came out last year, this one wins. I like the actors, many you will recognize from the 1990's. This movie is a lot easier to follow than Everest and after having read many books on the subject, this one more closely follows the actual events.
Leer más
A 9 personas les ha parecido esto útil
Útil
Enviando comentario...
Gracias por su comentario.
Lo sentimos, no hemos podido registrar tu voto. Vuelva a intentarlo
Informar de un abuso
Traducir reseña a Español

pjf
4,0 de 5 estrellas remember this is a dramatization, and it's worth a watch
Revisado en los Estados Unidos el 23 de abril de 2015
Compra verificada
I've read all the books on Everest's 1996 season (and many others) so I've read about this expedition from all the POVs who've written their recollections, and seen all the documentaries. So I had to see this too.

Like many movies made of real events, it takes some real liberties with the truth, and to make it a better "story", consolidates and leaves out people and stories. Given events where so many people died, though, misrepresenting events to make a better story is well, disrespectful. In addition, Krakauer is made more central to the action -- the Sherpa leaders are shown appealing to him on various things, and he's mentioned as being involved in the rescues, when in fact, Krakauer was only a client, not involved in decision making, Sherpa leading, or rescuing. (A really embarrassing scene is when a Sherpa begs Krakauer to stop so they can rest). Not that Krakauer didn't perform well on the mountain, being one of the first to summit, but no way would he have a Sherpa begging him to stop so they could rest.

Boukreev who was Fischer's lead guide, is shown in a fairly unflattering light. There's of course controversy on this. If you read the survivors accounts, certain of Boukreev's clients said they didn't want to be alone on the mountain with him, because they felt he wasn't responsive to their needs. Of course, Boukreev had a different perception of a guides duties. But when he was heading down the mountain he blew past clients that could have used his help, and as for his activities during client's acclimatization, Fischer was reported to have bitterly complained to his business manager that Boukreev was not attending to clients. So while the movie over-dramatizes that conflict, there really was some basis for it. And it also reportedly left Fischer overly stressed and overworked, which perhaps left him underacclimatized and contributed to the edema that killed him. On the other hand, even if too little too late, after the clients failed to return, Boukreev went out and saved many lives. Still, I think the script was overly hard on him.

As far as accuracy on climbing details, there were some irritations - climbers not wearing goggles at times (when even a few minutes exposure could result in snow blindness) or gloves. Of course an actor covered in mask and goggles can be hard to discern one from the other. And don't think you'll see the Himalaya here, this was filmed in the alps. The long acclimatization climbs are more or less skipped over.

OTOH, things like the logjam on the Step, the suddenness of the storm, the effects of running out of oxygen on climbers, are done well. It's only once the storm hits that things go far off accuracy again, with the Krakauer being involved in the rescues and coordination more than he was.

So basically, if you watch this the first time, you might really find objectionable that it deviates in some respects from actual occurrences. and draws some characters and events with a too broad and thus somewhat inaccurate brush.. But it actually isn't too bad a movie, when you realize that all movies of true events deviate somewhat from the truth to tell a story. And while this has some deviations from reality that seem excessive at first, actually it really isn't too far off the mark, or too bad a movie.

Debzlewis
5,0 de 5 estrellas I really loved this book
Revisado en los Estados Unidos el 30 de julio de 2018
Compra verificada
I really loved this book! I first read it about 20 years ago. I'd read about the accident so I purchased the book. It was mesmerizing. For some reason I was talking about it to a friend and gave her the book. I love reading about places that I'd never go to. So...I purchased the digital book and read it again. It was just as good as before. Jon is an entertaining writer and I've read other books by him since. The one thing that gets me is WHY??
Leer más
A una persona le ha parecido esto útil
Útil
Enviando comentario...
Gracias por su comentario.
Lo sentimos, no hemos podido registrar tu voto. Vuelva a intentarlo
Informar de un abuso
Traducir reseña a Español

missy
5,0 de 5 estrellas excellent
Revisado en los Estados Unidos el 28 de enero de 2016
Compra verificada
I believe I have reviews this on a prior purchase. It's a great story though other DVDs have come out with the same story. This one was very impactful to me. The book is even better -- just as good.
Leer más
A una persona le ha parecido esto útil
Útil
Enviando comentario...
Gracias por su comentario.
Lo sentimos, no hemos podido registrar tu voto. Vuelva a intentarlo
Informar de un abuso
Traducir reseña a Español

Shoozie
4,0 de 5 estrellas Very good .......but
Revisado en los Estados Unidos el 19 de noviembre de 2013
Compra verificada
The book is what lead me to this movie. Having read the book - - which is EXCELLENT....is what helped me give this movie 4 stars. Nothing can compare to the book written by Jon Krakauer. His book led me to purchase many other books on the subject of climbing which eventually lead me to this movie. Very good....but I would suggest you read "Into Thin Air", then watch the movie.
Leer más
A una persona le ha parecido esto útil
Útil
Enviando comentario...
Gracias por su comentario.
Lo sentimos, no hemos podido registrar tu voto. Vuelva a intentarlo
Informar de un abuso
Traducir reseña a Español

JRA
3,0 de 5 estrellas Good Story... Poor Sound Quality
Revisado en los Estados Unidos el 4 de enero de 2013
Compra verificada
I picked up this DVD for my class after we read "Into Thin Air". For the most part, the class enjoyed it... however the Sound Quality - especially between cut scenes - was quite poor. Sometimes the background and sound effects were louder than the dialogue which became annoying.

BargnShopr🎁
5,0 de 5 estrellas Remember Mt. Everest
Revisado en los Estados Unidos el 10 de mayo de 2015
Compra verificada
I read about this event in a Reader's Digest article many years ago. Upon seeing the film, the horror of what those climbers experienced had a much greater emotional impact. The special effects were awesome!! You had a sense of being right there with them. Remember those lost recently in the earthquake in Nepal.
Leer más
A 2 personas les ha parecido esto útil
Útil
Enviando comentario...
Gracias por su comentario.
Lo sentimos, no hemos podido registrar tu voto. Vuelva a intentarlo
Informar de un abuso
Traducir reseña a Español