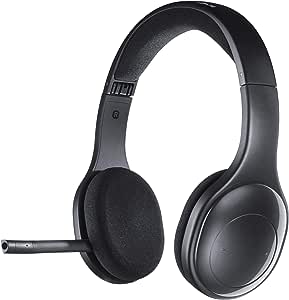 RussC
4,0 de 5 estrellas Great for Skype, with a few very minor quibbles.
Revisado en Reino Unido el 27 de abril de 2016
Diseño: Auricular inalámbricoEstilo: H600 - Non BluetoothCompra verificada
I bought this Logitech cordless headset to replace my corded version from the same manufacturer. The corded version served me well for a number of years, but I got a little tired of being tethered to my PC (and of the cord tangling incessantly).

I wanted to roam free whilst on those long, boring Skype calls; to be able to stand by my window and watch herds of Wildebeest sweeping majestically across the plain. And you know what, this headset was the answer – excepting the sweeping herds of Wildebeest, which are now far sparser in the West Midlands greater conurbation than they used to be. Over-hunted, probably.

Whilst I very much like the freedom that the Logitech headset gives me, I do find that even at the largest setting it feels a little tight on the ears at first. Bear in mind though that I do have quite a big head (my mother has never forgiven me), and that after a little while they do seem to have more give in them (I’ve not felt compelled to ask my mother about that, I should probably mention).

Of course, being wireless, the headset has to power itself – so there’s a rechargeable battery built into the headphones. If I had a key piece of advice, it’s to remember to turn off the headset when you’re not using it, otherwise the battery can drain itself over the course of the working day leaving you embarrassed when there’s a crisis meeting in Basingstoke and you have to resort to shouting at your laptop microphone and covering your screen in spittle and crumbs.

Generally though, it’s a good bit of kit this, and I’d recommend it for Skype warriors that don’t like to be stuck in their chair. The audio quality is good, probably not great for Drum n’ Bass (whatever that is), but certainly well up to spec for the spoken word. Similarly, I’m nice and clear down the microphone, or so I’m told – but it can’t do much about the midlands accent. Perhaps they can work an inline RP translator into the next version for when I’m Skyping the Queen.

To begin, this is not the first H800 headset I have owned. I've bought and used three before this recent purchase, and as I am typing this, I am still using the 3+ year old version that despite reviews about durability and battery life is still kicking. I use this headset constantly. It's on and in use for most of the day, every day. Whether it’s for gaming, listening to music or taking calls I've found its performance to be excellent and reliable for a headset in this price range. One headset to rule them all. I can swap between my computer and phone with ease. It does everything I need it to, and even after all this time I still get several hours of battery life. It fulfilled its purpose without hassle, friction, or fuss. I do find its range to be somewhat diminished in its old age, however I am now looking into a replacement battery and dongle--the fact you can swap out its parts is yet another great feature. I've even recommended this headset to others, several times, which makes this whole situation especially irritating.

The only reason I looked to buy another is because I wished to get one for my job instead of using my own. The headset I received is nothing like the one I purchased a few years ago, of the same make and model. I ignored the slight changes to branding, as I was sure this is the same headset and would work the same way. I was wrong.

Out of the box it felt like the same headset when I put it on, albeit a bit more snug but that's probably because my old one was so worn in. It paired and worked as expected with my mobile phone, however when I tried to use it with my PC that's when the trouble started. While the volume buttons work fine, none of the media controls do, which was surprising because my previous versions of this headset, of the exact same make and model, did not have this problem. I did what any good tech support person would do and immediately began troubleshooting.

I googled and quickly found that Logitech had in 2014 created an article on its site saying that despite their advertisement, you actually could not "chat, rock and surf on multiple devices" unless you are listening to music through iTunes or Windows Media Player. This was unexpected, as my old H800 headset worked with multiple applications, including Spotify and Foobar2000, and I've never encountered problems with the media control buttons. For the sake of troubleshooting I opened Windows Media Player, went through the initial setup (because I actually never had used it before), and found that the new headset did NOT work in Windows Media Player either! Deciding against downloading iTunes, I tried this on another Windows PC, with the same disappointing result. I downloaded the media control software on Logitech's site, and installed it on both a Windows 10 machine and a Windows 7 machine and was not able to get the buttons to work still.

As I am such a fan of this headset, I assumed that I received a defective product. This headset was clearly functioning in a way that was different to my 3+ year old version of the H800, therefore it must be broken. I promptly requested an exchange and received another H800 headset. Surely this would work as it should.

It, in fact, did not. It functioned in the same way as the previous one, which is to say in manner that is inferior to a headset that was made years ago despite advertised to be the same model. I’m not sure what has changed about the innards of this headset, but it is not the same one I purchased years ago, and if this several-paragraph review is any indication I am extremely disappointed and annoyed that I need to find another headset that did everything this one used to do.

I will be returning the second one, for a refund, and as said earlier I will be looking into spare parts for my old headset. In a world absolutely saturated with technology and chock full of cheap plastic nonsense it is difficult to tune out the noise and find something that is reliable and simply does what it needs to do, without hassle, friction or fuss. The Logitech H800 did everything I needed, until it didn’t.
Leer más
A 37 personas les ha parecido esto útil
Informar de un abuso
Traducir reseña a Español

Amazon Customer
4,0 de 5 estrellas Comfy Headphones but broken after 10 months of normal use
Revisado en Reino Unido el 15 de noviembre de 2017
Diseño: Auricular inalámbricoEstilo: H800 - BluetoothCompra verificada
Bought these Headphones in January 2017 and have only now posted a review as they have stopped working and no longer charge from any USB cables up until them they have been a good buy.
They are guaranteed by Logitech for 2yrs but trying to get Logitech Support to respond to any emails regarding a warranty replacement have so far proved fruitless and as Amazon don't replace them after a certain time (unsure how long that period is) i'm currently left with a set of comfy headphones that are collecting dust until Logitech decide to respond to my emails

Update...Amazon replaced them after I couldn't get a response off Logitech...thank you Amazon
Leer más
A 28 personas les ha parecido esto útil
Informar de un abuso
Traducir reseña a Español

D. J. Mcloughlin
5,0 de 5 estrellas Does exactly what I wanted from them
Revisado en Reino Unido el 30 de julio de 2019
Diseño: Auricular inalámbricoEstilo: H800 - BluetoothCompra verificada
So I was after a pair of headphones that, bizarrely, let me hear more from outside - I have been spooked a couple of times by being tapped on the shoulder because I didn't hear someone coming! I have a pair of G933 Artemis Spectrum headphones, and although they are great, they can get too hot and heavy so I wanted to try something lighter. I went for these after long deliberation/browsing and I am very pleased with them - they are very light, last for a full 6 hours and produce decent sound. I was worried going for foam padded headphones but the pads are very durable and easily replaced should I need to (lots if them available from a variety of places.) The microphone that flips up is very clear (according to my gaming friends!) and the volume control works nicely; albeit it feels a little flimsy but it's no biggie. The padded headband is very comfortable too. I paid ~£80 which I felt was a little steep but I trust Logitech products so got them anyway, I now see on Amazon they're ~£64 which is more of a bargain! The dongle it comes with is nice and small, and, plugs in and works straight out of the box. Being able to fold them up is an added extra should I need them on the move which I haven't needed to yet but it's a nice feature to have. Overall, I'm pretty pleased with these.
Leer más
A 5 personas les ha parecido esto útil
Informar de un abuso
Traducir reseña a Español
Ver todas las reseñas
¿Desea descubrir más productos? Visite estas páginas para ver más: cascos bluetooth diadema, auriculares abiertos, auriculares bluetooth wireless, webcam logitech, logitech headset
Amazon Prime: envíos rápidos, GRATIS e ilimitados y mucho más
Los clientes de Amazon Prime disfrutan de Envío en 1 día GRATIS en dos millones de productos y Envío en 2 o 3 días en millones de productos más, Acceso a series y películas en Prime Video, incluyendo las series Amazon Originals, más de 2 millones de canciones y cientos de listas de reproducción sin publicidad con Prime Music, cientos de eBooks en Prime Reading, Acceso Prioritario a las Ofertas flash y Almacenamiento de fotos gratis e ilimitado en Amazon Drive.
> Más información