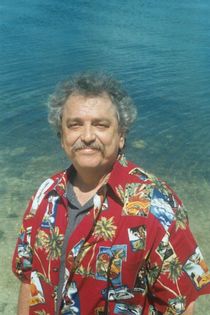 Lucky In Cyprus: A True Story About A Teacher, A Boy, An Earthquake, Some Terrorists, And The Cia Tapa blanda – 6 noviembre 2008

LUCKY IN CYPRUS is a coming-of-age story set in the Middle East during the height of the Cold War. An American teenager - son of a CIA operative - is inspired by grand events and a Greek Cypriot teacher to learn about survival and his art. He witnesses earthquakes and riots and terrorist attacks, but in the end it is his teacher's gentle lessons that keep him whole.
Leer más
Previous page
Next page

Allan Cole is a best selling author, Hollywood screen writer and former newsman. The son of a CIA operative, he was raised in the Middle East, Europe and Asia. His books include the landmark SF series, Sten, the Timura Trilogy, and the Vietnam classic, A Reckoning For Kings. He has sold more than 150 hours of television, ranging from Quincy, to Magnum, P.I. to Walker, Texas Ranger.

Lynne Hunt
5,0 de 5 estrellas Wonderful.
Revisado en el Reino Unido 🇬🇧 el 12 de mayo de 2016
Compra verificada
Really enjoying this book & the insight it has given me into life in Cyprus in the 50's, well before I lived there as a child in 1965-67. Beautifully written & a true story.Only half way through & reading it while staying in Cyprus. Finding it hard to put down. The kindle version I am reading has many typing errors however.
Leer más
Informar de un abuso
Traducir reseña a Español

Lucky in Cyprus is a uniquely American tale that I (as an American) recommend over the more famous Bitter Lemons of Cyprus. It is the author's story of coming of age in the Republic of Cyprus as a Foreign Service brat at the height of the Cold War and the increasing tensions of EOKA's struggle for independence from British rule. How much of the account is fictionalized or exaggerated only the author knows, but it's clear from the geography and history covered that Cole learned a great deal about Cyprus. I learned of several legends of Cyprus and historical events from the 1952-1953 period from reading this book that I later confirmed with other sources.

For the last two years, I lived not far from the area where Cole once lived, no longer a suburb as Nicosia expanded greatly after 1974. It is fascinating to read of ox carts and camels sharing the road with automobiles entering the Famagusta Gate in Old Nicosia as late as the 1950s. It's also amusing to read of the lack of proper medical care and how American families had to import their own milk pasteurizers as milk was literally killing children back then. The Cold War history is also interesting, Cyprus is still on the front lines of such things today and the struggle for influence in the Eastern Mediterranean country is as alive as it ever was.

Cole learned a lot of Greek language and customs, thanks to a Greek Cypriot tutor. He was also being afforded a unique experience in a hospital with British forces. There is something in the book for everyone, but I found it a compelling coming-of-age story and a good brief look at Foreign Service life through the eyes of a child in the 1950s. The tragic ending of the book leaves the reader with the same sentiments as Durrell's Bitter Lemons. Cyprus is an island paradise with millenia of deep, lasting scars.

I give this book four stars out of five. Since it appears to be self-published, it could use a good editing for spelling and punctuation. But it's a fantastic read.
Leer más
A una persona le ha parecido esto útil
Informar de un abuso
Traducir reseña a Español

Deborah B-Y
5,0 de 5 estrellas Touching, sometimes sad, but with lots of hope
Revisado en los Estados Unidos 🇺🇸 el 23 de junio de 2011
Compra verificada
Lucky Cole, the son of a CIA operative in the early years of the Cold War, spends a couple of his teenaged years living on the island of Cyprus when it was still a British colony. In that short space of time, he experiences the terrors of having an alcoholic father who is an ugly, violent drunk, an earthquake that levels the village around him, the brutality of being an Irish-American Catholic in a British boys' school, the loss of young love, a life-threatening illness and the deadly consequences of an independence movement.

But he also falls under the influence of an exceptional private tutor who introduces him to world history and an open mind with a decidedly Cypriot slant, two lovely young girls with whom he falls in love, and the revelation that good people are all around him, whether Greek or Turkish, Orthodox or Muslim or Anglican. He comes to Cyprus a child and leaves a young man.

This is a memoir, but so personal to the author that he needed to write it in the third person to fully express his emotions. While dramatic and touching and sometimes sad, it is also full of episodes that have you laughing out loud, including a kerosene-addicted toddler, adventures with young British soldiers, meeting Cypriot artisans who claim direct lineage with some of Greek history's greatest thinkers, haggling with a Turkish camel driver. Most central to the story is his relationship with Jim, the college-educated, politically involved bicycle shop owner who tutors Lucky, but also mentors him as his family can't, in gaining a wider world view.

Allan Cole, who is a novelist, screenwriter and former reporter really knows how to tell a story to keep a reader emotionally involved. This memoir reads like a novel is many ways. By stepping back into third person, he creates a slight distance that allows the reader to join him in understanding his growth as a person, and yet be entertained thoroughly.

The only flaw in this wonderful book is the formatting caused the loss of a word here and there, but that is not the author's fault. I highly recommend you buy and read this book. Whether you can read it nonstop or in bits and pieces, you will fall in love with Lucky through his journey.
Leer más
A 2 personas les ha parecido esto útil
Informar de un abuso
Traducir reseña a Español

Ima Kindler
5,0 de 5 estrellas A wonderful, must read
Revisado en los Estados Unidos 🇺🇸 el 19 de mayo de 2011
Compra verificada
I wasn't prepared for the emotions this book generated. I knew it was non-fiction and expected it to read as a autobiography. It doesn't. I suspect it's because Mr. Cole needed to tell the story at arm's length. After reading this book, I understand why. Mr. Cole as Lucky swept me along on an adventure of a lifetime.

First, let me say as an army brat I've always felt I was well-traveled. Next to Allan Cole's life on Cyprus, I'm a babe in the woods. He invites us in to his life for the time he lived in Cyprus. As I read the book, I actually walked the streets of Cyprus with him. I tasted and smelled the food, the city, the mountains he climbed, and crushed nettles beneath his feet. I hurt for him when he attended the English school and was betrayed by a friend.

Yet through it all, Lucky loves life, has never met a stranger, and is filled with insatiable curiosity. I laughed with him and cried with him. I envied his life on Cyprus and loved his teacher Jim. Through Lucky, Jim's quiet wisdom also taught me a number of things. This book is one of those rare reads that I will return to annually and experience something new with each reading. And maybe, just maybe, I'll be able to go to Cyprus myself.
Leer más
A 4 personas les ha parecido esto útil
Informar de un abuso
Traducir reseña a Español
Ver todas las reseñas