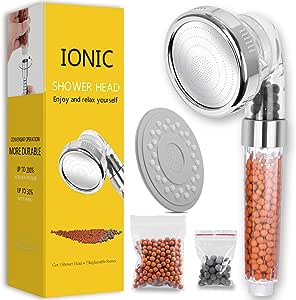 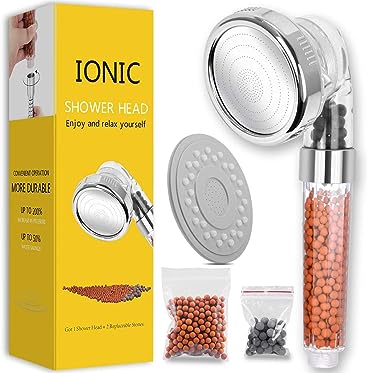 We moved in to a new house back in November 2018. Upstairs in the main bathroom is an oldish Mira electric shower, downstairs a shower with a pump. We had the immersion tank and boiler taken out and replaced with a Combi Boiler, which meant losing the pump downstairs. To be honest, the shower downstairs was pretty rubbish beforehand and with the combi boiler it made a difference to the pressure. The electric shower has been the problem though. It was ok, but pretty weak pressure meaning it felt like it took ages to shower properly. Which lead me to buying this.

Now it only arrived today so I can't talk about how different it makes my skin feel or difference to the water, but I can talk about the "water pressure" bit.

The previous shower head, as I said, was ok but never really felt like there was any pressure behind it. You had to stand directly underneath the head as the pressure meant the water didn't reach very far up the bath. On arrival I changed the heads over and turned the shower on expecting something similar.

Now, I wouldn't say it changes the pressure. The electric shower does what it does. However, the effect of forcing water through very fine holes gives the impression of higher water pressure. When I turned it on it was on the Jet setting and water shot up the length of the bath hitting the wall at the far end. The clicked the button to the Combined setting and the length of spray dropped fairly dramatically but was still better than the old shower, covering about a third of the bath. The final setting, which I assume is Rainfall, the water once again covered the length of the bath. So yes, you do get the illusion of higher pressure due to the way the water is forced out.

The effect of this however is that the spray is very fine and very gentle. It does get you wet, it does make for a much better shower but unlike a true high pressure shower you won't feel massaged when on the Massage setting. it simply doesn't have the force behind it to pummel you.

It has, I'm happy to say, exceeded my sceptical expectations but I'm not going to stand here and say it's changed the world. We will upgrade our shower at some point to one with more power.

As I say, this is day one of having it so I'll update if there's anything new to say about leaks, loss of pressure, or anything else that might let it down but first impressions are pleasantly surprised and for £14.99 I'd say it's worth it's money.

We went back to our original shower head a week later. Although at first it seems like an increase in pressure and the water jet reached further, this was only down to the fact that the water is being forced out of tiny holes. It makes no difference to the actual pressure you experience when standing in the shower. If anything, this was worse. It's like have someone mist you with one of those garden spray bottles. And because it's so fine, it gets cold quicker so you step in to a cold shower and have to be close to the head to feel the warmth, this meant having to turn the temperature up on our electric shower and then losing more pressure. My initial excitement was short lived and this head is now gathering dust on the windowsill waiting to be thrown out.

My previous shower head had started to fire water jets in all directions due to a build up of lime scale inside the unit. So I decided to replace it (cleaning it wasn't a great success) and I thought "if I'm going to do it I may as well try for an upgrade". You know what, I think I may have got one.

The is a lot of rubbish in the sales pitch for these but what it does it restrict the flow rate (increasing the pressure) and agitates the water around the beads causing bubbles to form. This means that you get a 'lighter', 'softer' stream of water, but at a higher pressure. I imagine it's a lot like being beaten by a pillow filled with the wings of fairy's (they should give me a job on their marketing team!)

The head gives a nice wide angle on the 'rain' setting and although it feels a lot softer on the skin/face it certainly washes the shampoo etc our of my hair with little to no effort.

LuckyGuy
5,0 de 5 estrellas Great value - well engineered
Revisado en Reino Unido el 24 de enero de 2019
Color: Clásico DuchaCompra verificada
Knowing we had low water pressure thanks to a defective inlet valve on the main this was a gamble ... it paid off handsomely.
I discovered these units in a B&B last summer and monitored reviews whilst weighing up the benefits vs the bad experiences shoppers reported with similar items.
Our water pressure is so low it only just makes the first couple of balls wobble, but the champagne effect at the business end is good.
The rocker switch in the head falls easily to hand and works perfectly once the water is flowing. The centre setting delivers a blend of the two extreme choices ... 3 settings ... simple.
The actual final section unscrews for cleaning - essential in our hard water environment. The holes appear precision cut and certainly deliver as intended.
The water is softer, the pressure increase doesn't break our electric shower but does result in a fab clean feeling as you shower.
Thr refills are a nice touch at this price and I would hesitate to argue against buying one as your next shower head.

Ange
5,0 de 5 estrellas Very easy to use straight out of the box. Impressed so far.
Revisado en Reino Unido el 10 de agosto de 2019
Color: Cabezal de Ducha de Filtración de 3 CapasCompra verificada
I was looking forward to receiving this after thinking about it for a while, and a few mixed reviews. It was so easy to set up, (no setting up required actually) and I must say I was very impressed, the pressure is so much better than my previous shower head, and the settings are great (It was a bit tricky getting one setting with one hand, as I was trying to video me using it, but no problem when used normally) and nothing leaks. Although it is plastic, it feels pretty sturdy. I've not washed my hair with it yet, so can't comment on that, but so far looks really promising. I would recommend this shower head.
Leer más
A 50 personas les ha parecido esto útil
Informar de un abuso
Traducir reseña a Español