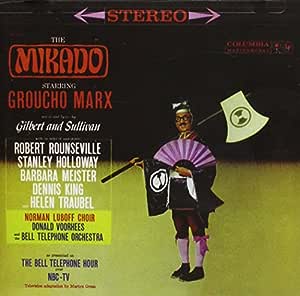 Ingbert Edenhofer
4,0 de 5 estrellas operetta as it should be
Revisado en Alemania el 16 de julio de 2009
Compra verificada
Though I am very well-versed in the Broadway musical and its offshoots, I am not yet very familiar with operetta in all its forms. Apparently, this recording of "The Mikado" is not generally regarded as one of the better representations of Gilbert & Sullivan but for me, it is the first, and I really like it. The main attraction back in 1960 certainly was Groucho Marx as Ko-Ko, the Lord High Executioner, and he still is. So what if he is not the greatest singer - it is a misconception to assume that operetta is only about the music, it is just as much about the comedy, and Groucho Marx delivers very well. particularly in "As some Day it may Happen" but also in his overall line-reading. Everything else on this CD may seem secondary to Marx but Barbara Meister as Yum-Yum, Robert Rounseville as Nanki-Poo and Stanley Holloway as Pooh-Bah (the Lord High Everything Else - it's testament to Gilbert's genius to come up with something like this) are very game to support him. The true star of the recording, however, may very well be former Met start Helen Traubel as Katisha, the woman with the attractive elbow (ah, Gilbert) - when Traubel and Marx face off, it's comedy galore. I am sure that a DVD version of this would be more interesting but this CD is a great start.
Leer más
Informar de un abuso
Traducir reseña a Español

David Cellitti
5,0 de 5 estrellas Wonderful Recording
Revisado en los Estados Unidos el 18 de junio de 2013
Compra verificada
For decades this was the only complete stereo D'Oyly Carte Recording and was in the library of all devoted savoyards. In the past few decades it has been lost in the shuffle of newer entries to the recorded canon; which is a shame. This is a wonderful recording. I had forgotten what a joy it really is.

The casting is classic. Donald Adams and Kenneth Sandford were just starting their lengthy stays with the company and their interpretations of their roles only ripened with age. Ann Drummond-Grant who started with D'Oyly Carte decades earlier as a soprano, returned later as a contralto is a perfect Katisha. Both Alan Styler and Thomas Round had also been around for many years and were well steeped in "The Tradition." The affection that conductor Isidore Godfrey had for these works is very much in evidence. Peter Pratt stayed with the troupe for a relatively short time, but was certainly a worthy successor for Martyn Green when he and other stalwarts made their mass exodus from D'Oyly Carte in the mid 50's.

Don't let the age of this recording (1957) put you off. The sonics are remarkably fresh and vibrant. To sweeten the deal overtures from PIRATES, PINAFORE and IOLANTHE are included (conducted by Arthur Fiedler) as well as a 1958 recording of PINEAPPLE POLL conducted by John Hollingsworth. All in all, a pretty sweet deal!

J. T Waldmann
4,0 de 5 estrellas A "MIKADO" FOR THE MASSES . . . AND WHAT'S WRONG WITH THAT?
Revisado en los Estados Unidos el 27 de enero de 2008
Compra verificada
I must admit that I had doubts about Groucho Marx performing the role of The Lord High Executioner in Gilbert & Sullivan's most popular work, but after several listenings, I find his brand of hi-jinx (". . . equal parts Rufus J. Firefly, Quincy Adams Wagstaff, Otis B. Driftwood, and Captain Geoffrey T. Spaulding"), quite appropriate for this "simple tale of love and intrigue." Perhaps he drags the tempo a bit in "I've Got a Little List," but everywhere else, he's a delight, especially playing opposite Helen Traubel's Katisha (Margaret Dumont, anyone?). Just give a listen to their "There Is Beauty (in the Bellow of the Blast)."

Martyn Green, one of the better Ko-Ko's of modern times, not only was one of the producers of this 1960 Bell Telephone Hour Production (NBC-TV), but he also took on the formidable task of adapting a two-hour stage production into a 50-minute television special. And he's done quite a fine job of it. Most of the familiar song have been retained, albeit somewhat truncated at times, and he has supplied some rather witty dialogue to keep the plot moving at a lively pace. Donald Voorhees even adapted the instrumentation of his Bell Telephone Orchestra to fit Sir Arthur Sullivan's original orchestrations.

Even though Groucho got top billing, the rest of the cast is as good, and in some cases, even better in their respective roles. Leading off is Robert Rounseville ("Candide," anyone?) as Nanki-Poo, Barbara Meister as Yum-Yum, Stanley Holloway as Pooh-Bah (Lord High Everything Else), Dennis King as The Mikado, the aforementioned Helen Traubel, Melinda Marx (Groucho's daughter) and Sharon Randall as the Peep-Bo Sisters, and the incredible Norman Luboff choir as the Citizens of Japan. "Taped expressly for Columbia Records and produced by their president, Goddard Lieberson," (with pre-digital demonstration-quality sonics, I might add) this is an album to savor, to listen to repeatedly. Every word is intelligible; the style is "right on."

Kudos to DRG for bringing THE MIKADO and other "never before on CD" recordings back from the dead. Highly Recommended.