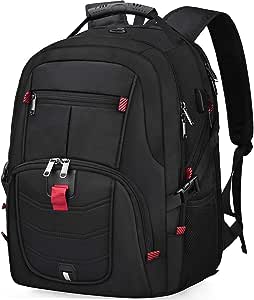 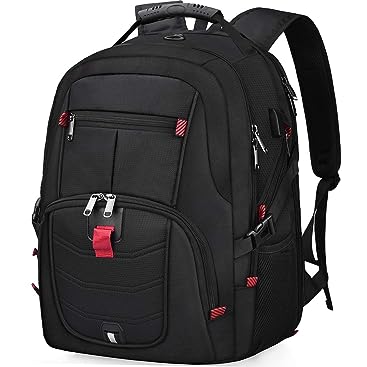 Color: Negro
Detalles técnicos
Información adicional
Ayúdanos a mejorar
Would you like to tell us about a lower price?

Binje
5,0 de 5 estrellas Pays to spend a bit more
Revisado en Reino Unido el 28 de febrero de 2019
Color: NegroCompra verificada
Being an all weather motorcyclist, I tend to use a backpack for my work bits including laptop etc. Admittedly I have always gone for cheaper stuff and usually they last a season or two before chinks start to appear in the armour so to speak. This time around I decided to spend a little bit more and see if the change in price is worth it. How completely accurate it has been. This backpack, although a bit more expensive, is an absolute gem. The quality of the materials is far superiod to what I have ever owned or used. There are tons of pockets for little bits and bobs. What I particularly liked is a small key ring holder thingy on the inside of the front pocket. Normally I chuck my keys in the side pocket of my current bag and then have to go rooting for them when needed. Not so much now as I know the keys will be hanging in their designated spot when I need them. Another really useful feature (especially now that the sun is out in UK) is the USB extension/port on the side which allows for a phone to be charged via a powerbank sitting inside the backpack. There is a USB port outside that allows for a charging cable to be connected to a phone which I think is a brilliant idea.

The laptop section itself is very well padded and the backpack has extra padding on the outside on the lower back as well along with a pocket. There is loads of room to chuck in all the bits that I need to carry around at times. I travel for work as well (not very often) and this will be ideal. The backpack is advertised as water repellent which will be useful when I am riding my motorcycle in typical rainy cold weather. Miraculously we have not had that kind of weather yet so it remains to be seen how it will hold up but for now I am very impressed with the build quality and utility of the backpack. Just goes to show it is worth spending that bit extra for better quality.
Leer más

That wasn't always the case, oh no ! When I was younger I was much more carefree about such things.
Having said that though, in those days things were a lot smaller and less noticeable, and you could get away with it as long as you didn't wave it in people's faces.
Then adulthood arrived with all its many advantages, and I now have a 17.3" beast, if you measure it diagonally....which I do...regularly.
And, it has to said, it does attract much unwanted attention; people recognise quality when they see it. And people can't seem to stop themselves asking me about it, which initially is very flattering, obviously, but quickly becomes tedious. There's only so many times you can truly enjoy explaining just how big it is, and how quickly it's up and ready for business. Things this impressive really do need to be experienced fully rather than trying to achieve satisfaction from a purely oral circumnagivation of such a tool - you can't appreciate a good Toad in the Hole just by licking the menu, as Fanny Cradock must have said a dozen times, if she said it at all.

Trouble is, I'm always a bit worried that someone's going to grab it, despite the fact that I am (also) blessed with a natural "whatever you're thinking of doing...dont !" demeanour about me.
But, desperate people do desperate things, and it really is the last thing I would want to get into a tug-of-war over, especially with a person I've only just met - Mother and Father raised me better than that. I'm very attached to it, and that's how I'd like it to stay.

As one grows older, a certain standard of modesty grows with one; what was acceptable to you then is not acceptable to you now.
And so, if it must be taken out, I choose to keep it covered; hidden from prying, inquisitive eyes.
Discretion is my watchword, and it would be unseemly (and dare I say it, uncharacteristic of me) to flaunt it in front of those less well equipped.

The really good thing is, it fits just as well in the rear as it does in the front.

That's certainly not always the case, is it ? Many models differ on this matter, with the majority (I would say) still insisting that only the front receptable is fit for purpose. It's really great to be given the option for a change.
And the Maker was definitely on the ball when this one was created.

There is also more than ample room for accessories - how often can you say that !?

Typically, once the primary void has been filled, there's rarely anything other than the bare minimum of spare space for additional items, even if you manage to locate other charming little nooks and crannies to insert them in.
And yet, no matter how big yours might be, I can tell you for a fact, you're not going have any problems whatsoever fitting in a mouse or two...or whatever your personal choice of rodent might be.

And so it is, with great purpose and sureness of step, that I can stride out confidently into the World, with my pride and joy slung over my shoulder, assured in the knowledge, and with a certain degree of deserving smugness, that unbeknownst to those that I might chance to meet along the way, I have on my person a thing of great beauty, indeed one of the best in its class, a tool of enormous value, and of personal joy and satisfaction......and I get to be very choosy who I show it to.
Leer más
A 6 personas les ha parecido esto útil
Útil
Enviando comentario...
Gracias por su comentario.
Lo sentimos, no hemos podido registrar tu voto. Vuelva a intentarlo
Informar de un abuso
Traducir reseña a Español