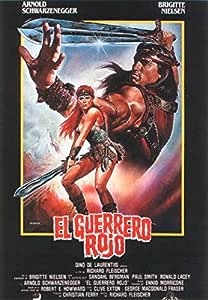 Robster
4,0 de 5 estrellas By no means great....but it is a great deal of fun
Revisado en Reino Unido el 3 de abril de 2017
Compra verificada
There are some films that are so embedded with a childhood nostalgia that I am just able to overlook their flaws on the basis that they were, a real solid & happy part of my younger years.
The kind of film I'd spend many hours watching over and over after renting it from the video shop.
And that is what Red Sonja is filed under for me, yes, it is cheesy, but it is as much a part of my childhood as He-Man & Skeletor and The Neverending Story.
I first saw it at a friend's birthday party on VHS, and I was hypnotised.
A young woman seeks revenge on an Evil Queen who murdered her family, and goes on a quest to find the Queen and destroy an all powerful talisman ( a sort of giant glowing paperweight ) which has been stolen from a temple on the day it was due to be plunged " into eternal darkness " and which, in the wrong hands, can bring destruction to chaos to the world.
Blessed with a " sword arm that has no equal " ( a gift from a spirit at the start of the film ) she is joined in her quest by Lord Kalidor ( a Guardian of the Temple from which the Talisman is stolen ) and a brattish Prince and his right hand man.
Brigitte Nielsen looks the part, even if she sadly delivers her lines like she's been given them on cue cards. Arnold Schwarzenegger plays Lord Kalidor, a softer, more charming version of the character Conan ( from the Barbarian & Destroyer films ) and Sandahl Bergman ( who played Valeria in Conan the Barbarian ) manages to steal every scene she's in playing the role of the Evil Queen Gedren with a gleeful relish!
It may be flawed, but I am very fond of it, and any kid of the 80's should add this to their collection
Leer más
A 4 personas les ha parecido esto útil
Informar de un abuso
Traducir reseña a Español

Albatross
4,0 de 5 estrellas So bad. So bad. So bad. I love it
Revisado en Reino Unido el 30 de julio de 2016
Compra verificada
Red Sonja is awful. Simple as that. But then that doesn’t explain why I’ve been watching it for around thirty years and loving it more and more every time. It’s a Schwarzenegger film. Only it isn’t. It isn’t because he’s neither the titular character, nor in it enough to really be classed as so. Brigitte Nielsen is ‘Red Sonja’ and therefore the star. Only she was even less well-known at the time than our Austrian friend. He had at least played Conan and, believe it or not, was also supposed to reprise the barbarian’s role here – only something to do with the film-makers not having the rights meant that his character had to be changed to ‘Calador.’ Arnie is basically the big name to sell the film on while his role extends to little more than an extended cameo.

Anyway, the film follows Sonja and her quest to avenge the death of her family in a Lord of the Rings style world of magic and wizards. And she’s pretty good. Or at least she’s pretty. If you look closely at her she’s actually not that muscular, so dispatching numerous bad guys with her sword is kind of a little far-fetched (but hardly the most far-fetched aspect of the story!). Plus every time she gets in danger, Conan (sorry – Calador), turns up and saves her, or at least someone else does. Like I said, Arnie pops up to help her, plus an annoying kid and his submissive wet blanket of a ‘protector’ (basically a fat servant who fights with a bone for some reason) also lend a hand every time she’s about to get stabbed in the back (which happens more than you may imagine).

The two leads may look the part, but the fact that neither are born to speak English and this film was made early in their careers, makes their dialogue extremely clunky and laughable. You can practically see them thinking of their next line before they deliver it.

So, acting is poor, dialogue is laughable, characters pretty wooden. And yet I love it. It’s one of those so-bad-it’s-good kind of films. It has to be seen to be believed. If you like Conan (the original!) then you should like this. And, believe it or not, there are actually some attempts at ‘character arcs’ involved here. Sonja must learn to trust men (and do other things with them) while the young kid must learn to actually be nice and not be such an insufferable brat.

Even Arnold was quoted as saying that Red Sonja is so bad that he uses it as a threat to discipline his children – if they misbehave they have to watch it ten times in a row, resulting in his kids never really giving him much bother. I must remember than when my own daughter wants to stay out late. Either way, it’s so bad that I love it. Sorry, Arnold, but I disagree!
Leer más
A 3 personas les ha parecido esto útil
Informar de un abuso
Traducir reseña a Español

A. W. Wilson
4,0 de 5 estrellas Brigitte or Janet Agren?
Revisado en Reino Unido el 21 de septiembre de 2012
Compra verificada
A spur of the moment purchase of an old much watched favourite, and I am glad I did. This cheap (VFM) Optimum Release doesn't disapoint. An excellent Scope print with great colour and sound, which show off the beautiful landscapes to perfection. It's 84 mins long so can't, and doesn't, get bogged down with boring dialogue - which is perhaps just as well as neither Arnie nor Brigitte shine in the talking stakes - but that doesn't spoil a fun film with loads of well choreographed action and in particular I was impressed with the quite vicious swordfight between Sonya and Queen Gedrun (the wonderful Sandahl Bergman). It's an honest adventure with little or no pretentions to be anything other than entertainment. At this price you can't really go wrong. Let me leave you with a question - Does anyone else out there think maybe Janet Agren (Sonya's sister) might just have been a better Sonya? A fiercer stronger face, and definitely physically able and Brigitte's equal?? Maybe not...
Leer más
A 4 personas les ha parecido esto útil
Informar de un abuso
Traducir reseña a Español

BUSABARNEY
5,0 de 5 estrellas ARNIE MADE THE MOVIE
Revisado en Reino Unido el 15 de septiembre de 2020
Compra verificada
WITHOUT ARNIE THIS MOVIE WOULDNT BE MUCH EVEN THOUGH HE IS MORE OF A CAMEO BUT HE IS IN IT ENOUGH TO MAKE A MEDIOCRE FILM INTO A GOOD FILM .. IF IT WAS JUST RED SONYA IN IT THEN IT WOULD BE A LET DOWN INFACR B.N WAS WRONLY CAST AS RED SONYA I FEEL ... YEAH IT WAS PRETTY CHEESY BUT THATS ITS CHARM
Leer más
Informar de un abuso
Traducir reseña a Español