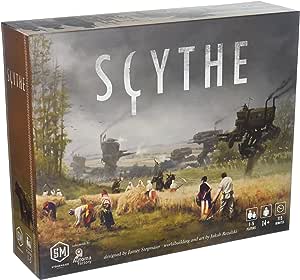 Lerxstfan
5,0 de 5 estrellas This game draws you in, eventually.
Revisado en Reino Unido el 24 de febrero de 2019
Tamaño: One SizeCompra verificada
First of all, I'm a 58 year old Modeller/Wargamer, in the past playing 20mm WW2, D&D and later Warhammer fantasy when the kids got older (I also had Steve Jackson's original edition of OGRE, long lost during house moves).

In the last 10 or so years I have gotten back into gaming, Axis and Allies Naval and Air Miniatures, X-Wing Miniatures. Also Munchkin, which my wife loves!

So what made me buy this game? Well, obviously the production is superb, Jakub Rozalski's artwork is stunning. I like the 'alternative' history style of setting for the game, and the fact it had a set of rules for solo play. It is worth looking at 'Lines42' Automa tutorial on YouTube, as well as his tutorial for the game itself.
First thing you notice is the box is hefty, full to the brim of quality components. Unwrapping all the card and unpunching all the counters takes a while. The playing Board is good quality and warp free, always a good sign.
This game at first seems very complicated, but it's not, just very involved, with a lot of aspects to the play. It takes a while to set up, even in 'Solo mode', but once you pick through the various rules it plays fairly quickly, but it does take time to remember EVERYTHING you have to resolve and be aware of, whilst playing.
I won't go into the gameplay because there are a wealth of videos online. I'm just going to say that, once you pick up the movement rules for the 'Automa' player (that is, your game driven opponent) this is a satisfying game, even though I haven't beaten it yet, and that's on the easy setting! Tactics and strategy is the key here, something I have yet to master, but this game will entertain those who only play once in a while and appreciate quality. Buy it.

BobbyDart
4,0 de 5 estrellas Strategy packed civilization game but maybe too complex for casual game players
Revisado en los Estados Unidos el 5 de julio de 2018
Tamaño: One SizeCompra verificada
I got this game in hopes of finding a new board game for my wife and I to play. We both enjoy strategy games and I had read a ton of good reviews about this game so I wanted to give it whirl. After owning this game for a while now, I feel ready to write a review about this game. This is not a game about dominating other players by force. The game dynamics are focused on developing your group and accomplishing your goals. You can choose from a variety of winning, so the strategies can change depending on the group you play and the people you play with. The strategy of the game is not too convoluted to teach other people, but this game does come with a ton of rules. I definitely spent a significant amount of time reading the rules and most specifically about how to take your turn. The rules are well written and make a lot of sense but there are a lot of them. The game recommends to read some of the basics and then give it a try. You can then get a feel for how it all plays out. This works however I found that my wife and I had to stop a lot of times to figure out various issues that came up. Over time we learned how to play and it was fun, however, I find that this game takes a long time and so we are not inclined to pull it out over other games. This game usually takes close to 2 hours for us to play even though we understand all of its complexities. We find that it is easier to play Dominion, Smallworld, or Carcasonne due to their quicker game play. If you are wanting a longer commitment with a good amount of strategy, this is a fun play. It works well with 2 people or more. We have played with others, but does take a long time to explain. If you want a shorter game, it might be best to look elsewhere.

If this review has been helpful to you. Please vote it as helpful, it makes me happy to know that these reviews can be beneficial to others.
Leer más
A 544 personas les ha parecido esto útil
Útil
Enviando comentario...
Gracias por su comentario.
Lo sentimos, no hemos podido registrar tu voto. Vuelva a intentarlo
Informar de un abuso
Traducir reseña a Español

Giskard
5,0 de 5 estrellas Scythe has been in the top 10 board games for over a year now
Revisado en Reino Unido el 31 de agosto de 2018
Tamaño: One SizeCompra verificada
Scythe is a great game that requires a fair large table, 3ft wide at least id side, 4ft long would be nice. Mine had some parts missing so i looked up the developer on Facebook said "Hay i have a problem", 2 weeks later i didnt have a problem and didnt need to rant or scream to get it fixed either. I always said you can tell a good company by how they fix their mistakes. Stonemaier Games are a top ranked contender in that department. Anyway this game has been a top 10 board game for over a year now and does not look like it will leave the top 10 any time soon. So yeah, i recommend it. It has some good expansions too now.
Leer más
A 10 personas les ha parecido esto útil
Útil
Enviando comentario...
Gracias por su comentario.
Lo sentimos, no hemos podido registrar tu voto. Vuelva a intentarlo
Informar de un abuso
Traducir reseña a Español

This game is filled with mechanics which, on there own, are quite simple. However, together they form a complex system, which must be considered carefully to maximise your efficacy on the board. direct player interaction is limited but meaningful, with each encounter playing an important role in the game as a whole.

Although the rules may seem labyrinthine to begin with, I found that after one playthrough and a little guidance, most of my friends and family members have been able to work out how to play, and have needed no/little help in subsequent games.

The look and feel of the game is excellent, with amazing artwork, miniatures and resources. The cards are all appropriately sized, and the cardboard tokens are robust. The amount of coins in higher denominations seems unnecessarily large for regular gameplay, however if you like to use them to keep track of score at the end then they are very useful.

If I had one criticism, it would be that there are too many different game mechanics and one or two could be removed to make a more streamlined game.

Chaundy
5,0 de 5 estrellas Must have game for those who love their board games
Revisado en Reino Unido el 14 de abril de 2020
Tamaño: One SizeCompra verificada
My family and I love playing board games and play games like Settlers of Catan, Pandemic and Risk to name but a few. So, when I learnt about Scythe I thought this would be a great addition to our collection of board games.
Thankfully I wasn't wrong. Scythe is an excellent game and enjoyable to play, so anyone who enjoys playing boardgames will love this. However, you need to do your research on the rules and I would recommend watching a couple of videos on YouTube that both go through the games general play and then watch how it's played in real time. That way you are clear on the rules.
I played it yesterday with my daughter (14) and we both loved it. We both had different strategies and although it looked like I was winning when we added up our scores I actually lost.
The game looks amazing as well. The art work is beautiful and the playing pieces create excitement when playing. Once you have mastered the rules it's easily a top 5 game of all time.
Would I recommend this game? YES I WOULD. 👍
Leer más
A una persona le ha parecido esto útil
Útil
Enviando comentario...
Gracias por su comentario.
Lo sentimos, no hemos podido registrar tu voto. Vuelva a intentarlo
Informar de un abuso
Traducir reseña a Español
Cargar más reseñas internacionales

Emma
5,0 de 5 estrellas SO worth the price if you are a board game fan
Revisado en Reino Unido el 26 de abril de 2018
Tamaño: One SizeCompra verificada
What a great game!
I bought this for my 25 year old daughter and her partner who are huge gaming fans. They spent pretty much the whole weekend that they received it, playing with other friends and said it was amazing. Challenging, with myriad variations. Far from most standard board games.
Excellent service from supplier - quick, efficient, very fair price and on time.
Leer más
A 2 personas les ha parecido esto útil
Útil
Enviando comentario...
Gracias por su comentario.
Lo sentimos, no hemos podido registrar tu voto. Vuelva a intentarlo
Informar de un abuso
Traducir reseña a Español

Captain Malta
5,0 de 5 estrellas I love this game
Revisado en Reino Unido el 15 de agosto de 2019
Tamaño: One SizeCompra verificada
If you are reading fifty reviews because you *can't quite* bring yourself to spend the money without in depth research, I get it. It's expensive, but damn is it worth it. Presentation is gorgeous, the artwork is incredible. Mechanics are really fun, and the replay-ability factor with the different combinations of faction mats, player mats and objectives feels endless.
Once you start playing, it's really easy to learn the rules and to teach others. We're having 5 player games every Saturday afternoon and really enjoying it, and we're no elite group of experienced table top gamers either.

Stephen
4,0 de 5 estrellas Good game, but maybe slightly too convoluted
Revisado en Reino Unido el 20 de febrero de 2019
Tamaño: One SizeCompra verificada
It's a good game, but I get the feeling that less can be more.

Could do with more interaction between the players as well.

Flashman!
5,0 de 5 estrellas Great for avid gamers
Revisado en Reino Unido el 3 de diciembre de 2019
Tamaño: One SizeCompra verificada
Have played this 5 times on game night and can’t get enough, I got the expansion ‘Invaders from afar’ as it gave an extra two factions. Not for the 7 players mode but gives more variety and it is really useful. Game does play within the time frame which is great as we always compete it in good time on game night. It’s a slow burner and can take awhile before you know if you are doing well but it adds to the flavor and ensures everyone is in the game in the end. 5 stars and
Leer más
Útil
Enviando comentario...
Gracias por su comentario.
Lo sentimos, no hemos podido registrar tu voto. Vuelva a intentarlo
Informar de un abuso
Traducir reseña a Español

Amazon Customer
5,0 de 5 estrellas Best game I've ever played
Revisado en Reino Unido el 1 de abril de 2020
Tamaño: One SizeCompra verificada
OK. This game is complicated but to be honest by the end of the second game we'd all got it.

It's a game of strategy and imagination; Chess meets Risk meets Cluedo with elements of D&D thrown in.

The cards and the models (pieces) are superb.

darren
4,0 de 5 estrellas Really like this game.
Revisado en Reino Unido el 19 de abril de 2020
Tamaño: One SizeCompra verificada
This is a 5 star game, with a 4 star box for putting your pieces in. We play it two player and really enjoy it.. Would be interesting to see how it plays with more,.
Leer más
Útil
Enviando comentario...
Gracias por su comentario.
Lo sentimos, no hemos podido registrar tu voto. Vuelva a intentarlo
Informar de un abuso
Traducir reseña a Español